The new Dior Addict be iconic glosses were released this year. The four it shades are Spring Ball, Diablotine, Délice and Princess, which also can be combined with the new released Addict Exremes (same names as mentioned). The whole range features 24 new glosses (shimmer, pearly, pure). The new face of Dior be iconic glosses is Daphne Groeneveld, a dutch model.

643 Diablotine is a reddish coral with a peachy hue, loaded with golden sparkles and coral shimmer. This colour was my first choice and I don’t regret it. The new Dior glosses are not just non-sticky but also long-wearing (about two to three hours on me), they have a very soft sweet scent (you have to be very close to even notice one actually). The texture is ultra smooth (Diablotine is very shimmery but still won’t feel gritty) and goes on like a dream.

The applicator picks up the right amount of product and I also noticed, that it won’t look messy, like some other glosses may turn after you have used them for a while. The finish is very glossy.

The picture above shows how much shimmer there actually is but as I mentioned, it won’t look like a glitter bomb once applied (if you don’t like sparkles in general, you won’t like this shade but thankfully, Dior released some glosses without any shimmer or sparkles as well, take a look at the pure line). 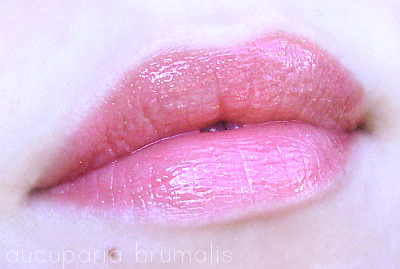 The first swatch shows how much product the brush is picking up, this is the amount I used for my lip swatch as well. Diablotine isn’t as reddish looking on my lips as on my arm swatch, my cool mauve coloured lips turn it more coral. This gloss is very moisturizing as well, smoothes out dry patches and makes my lips look slightly fuller than usual.

Never like this year I am into Dior makeup, the new glosses (absolutely love them), Dior Addict Extremes (one of my favourite lipstick formulas), the new Dior mono eyeshadows (at first I wasn’t impressed but after playing with them for a while I think they are a must have, especially applied wet but more on that soon).